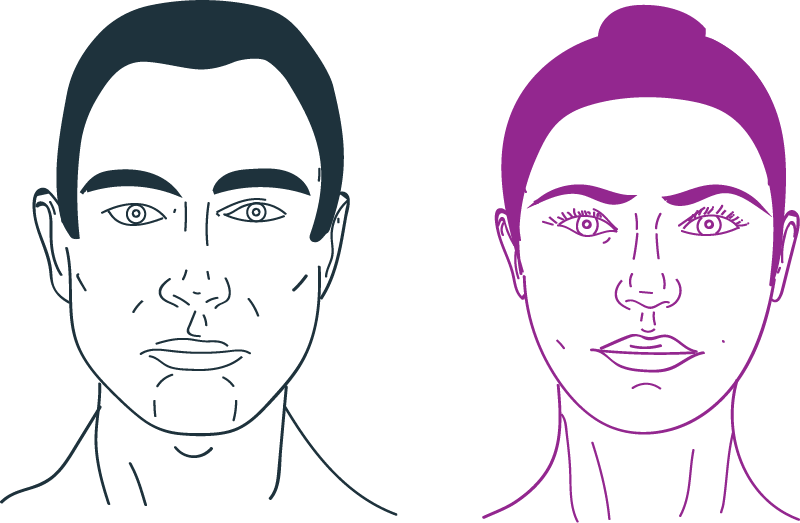 The hairline lowering surgery is a straightforward procedure. An incision is made along the hairline and skin section is removed from the forehead. The facial feminization surgeon pulls down the scalp to its new position and stapled to the rest of the forehead.

Additionally, we perform a brow lift to elevate the eyebrows to a higher position. Often done in conjunction with forehead recontouring and/or nose rhinoplasty.

Differences between the men and women hairline

The male hairline has an M shape which means that it usually has receding hairlines at your temples on both sides and the central part is curved forward. This M shape does not usually exist in women. They normally have an oval shape hairline.

What does the feminization hairline lowering surgery include?

It is a surgery for scalp advancement or hairline lowering. For this, two surgical techniques are required:

Hairline feminization surgery in combination with other surgeries

FFS surgeon often combine hairline feminization with brow feminization and brow lift surgery. These combined surgeries are performed under general anesthesia, the duration is about 2 hours and the patient remains hospitalized overnight.

The postoperative period is the same as for foreheadplasty since it is all treated at the same time: face reshaping or bone filing, eyebrow lifting and temporal fossa filling through lipofilling.

The patient will have a line of stitches around the head from one ear to the other that will be hidden by the hair. The wound and forehead can cause local discomfort that is easily controlled with common analgesics.

Additionally, inflammation and bruising will appear 24 hours after the intervention in the declining areas, such as the eyelids and will be asymmetric. The duration of the inflammation is usually one week and the bruises may last longer but they can be hidden with makeup.