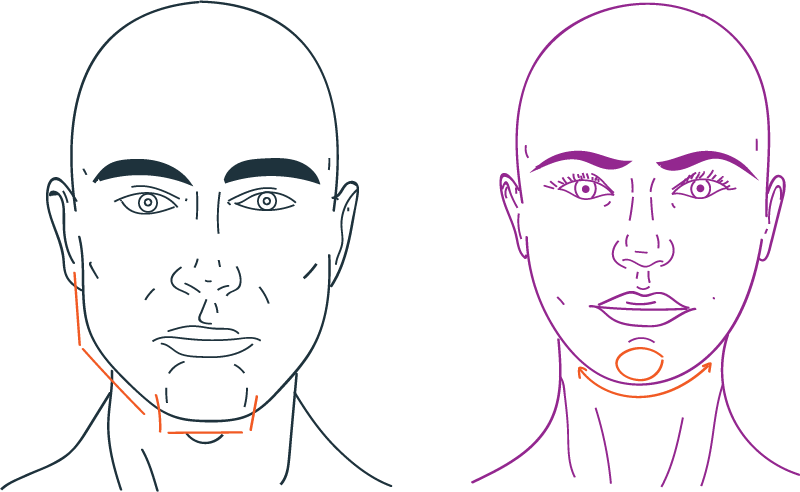 The male chin is wider, angular and more protruding than the female chin.  Women’s chins are generally rounded, smoother and softer in appearance.

The shape of the chin is an crucial aspect of gender recognition and critical factor for achieving the objectives of facial gender confirmation.

How does ching recontouring works in facial feminization?

Chin re-contouring (genioplasty/mentoplasty) reduces the shape of  large and prominent chins, and bringing the chins down to the smaller proportions of a female chin.

This goal of chin re-contouring is to get more feminine aesthetic and natural balance.

A chin re-contouring procedure can be undertaken on its own or as part of a facial feminization surgical process.

With feminization mentoplasty, we shave the chin through an intraoral incision, without leaving external scars on the skin and we manage to refine the chin. We can also retract or advance the chin in certain cases, or remove any existing asymmetries to achieve an overall aesthetically pleasing appearance.

A chin re-contouring procedure, as a single surgery,  lasts one hour and it is performed under local anesthesia and deep sedation. It is ambulatory care and the patient does not have to stay in hospital. The incision is made inside the mouth and it does not leave any scars.

During the postoperative period, the patient will feel local discomfort accompanied by some numbness in the chin and cervical area that will disappear after several days.

At Facifem, we have the most cutting-edge technology in cranio-facial surgery. Thanks to ultrasound, we can make a much more precise cut, perform bone polishing more efficiently, always making sure not to injure soft tissues that exists around the bones.

Ultrasound is the most advanced technology for performing large bone surgeries with precision. The ultrasonic saw can perform a precise cut or bone shaving, without damaging any soft structure, since it only cuts the hard tissue, not injuring any other structure, such as skin or nerves.

The use of ultrasonic saw makes the surgery safer, more predictable and with lower complication risks. All this means less postoperative inflammation and a lower risk of injuring structures as delicate as mental nerves.