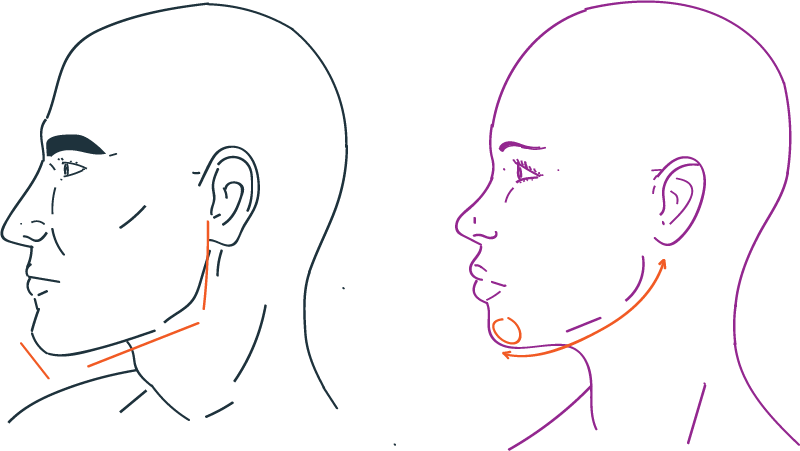 Differences between the men and women jaw

The masculine jaw is more prominent. The mandibular angle in men is usually more “square -shaped”, unlike the female one, where softer lines predominate. This is because in men, the chewing muscles, such as the masseter (in front of the ears), are larger.

It should also be noted that, according to the current beauty standards, many celebrities prefer a more “square” jaw with more prominent mandibular angles. At Facifem, we explain to our patients these peculiarities during the first consultation and perform a simulation to assess what is the most convenient in each case.

What does the jaw reduction for feminization include?

The feminization of the jaw includes reducing, lowering or shaving areas of prominent bone of both mandibular angles. It is done through intraoral incisions in the lower gums, along the jaw, so that no scarring is visible after the procedure. It is an ultrasonic anguloplasty of feminization.

Jaw reduction and chin recontouring before and after

For the hypertrophy treatment of the masticatory muscles such as the masseter, treatments are performed with toxins that reduce their hypertrophy, or even facial liposuction techniques to disguise the volume that exists in front of the ears.

Feminization of the jaw with ultrasonic technique (exclusively at Facifem)

At Facifem, we have the state-of-the art technology in craniofacial surgery. Thanks to the ultrasound instruments that are used, we can make a much more precise cut, polish or reduce the bone much more efficiently, and always making sure not to injure soft tissues with the ultrasonic saw.

Ultrasound is advanced technology used to perform bone surgeries where there is soft tissue around that cannot be injured. The ultrasonic saw can perform an accurate and precise cut or a bone shaving without damaging any soft structure, since it only and exclusively cuts the hard tissue, not injuring other structures such as the skin, epithelia, nerves ….

The use of the ultrasonic saw makes the surgery safer, more predictable and with lower complication risks.

All this means that there is less postoperative inflammation and a lower risk of damaging structures as delicate as the inferior dental nerve.

The surgeon accesses the mandibular bone through an incision in the lower gums.

At Facifem, we use the ultrasound system to reduce the thickness of the bone. When needed, we also cut the corners of the angles on both sides of the face, to reduce their height in the back part, which additionally gives the jaw a curved edge, typical for women.

When the masseter jaw muscles are too thick, they are reduced by cutting one part of them.

Jaw reduction surgery is combined with chin feminization to obtain harmony between the two parts of the face that are so connected.
If the patient is more than 45 years old and has lost skin elasticity, we sometimes recommend a facelift and / or a neck lift to tighten excess skin, if it does not adjust itself to the new jaw contour after a few months.

After your jaw reduction in Spain, you will leave with an elastic chin strap or a compression bandage that covers the lower part of your face. This will be removed one or two days later.

Jaw surgery is probably the most painful facial surgery. Your ability to chew will be limited for several days. It is essential that during the first days you follow a liquid food diet that later turns into a soft food diet.

Caring for the hygiene of the wounds in your lower gums until they close and preventing the proliferation of bacteria inside the mouth, is essential. This is why the patient will start with the usual teeth brushing at night the same day after the intervention, and rinse the mouth with special mouthwash 3 times a day, 24 hours after surgery.

Although your face will remain swollen, you can return to your usual daily activities 7 to 10 days after surgery, but you must wait until the second or third week before doing any heavy work or physical exercise.

Most people are satisfied with the result one month after the surgery.