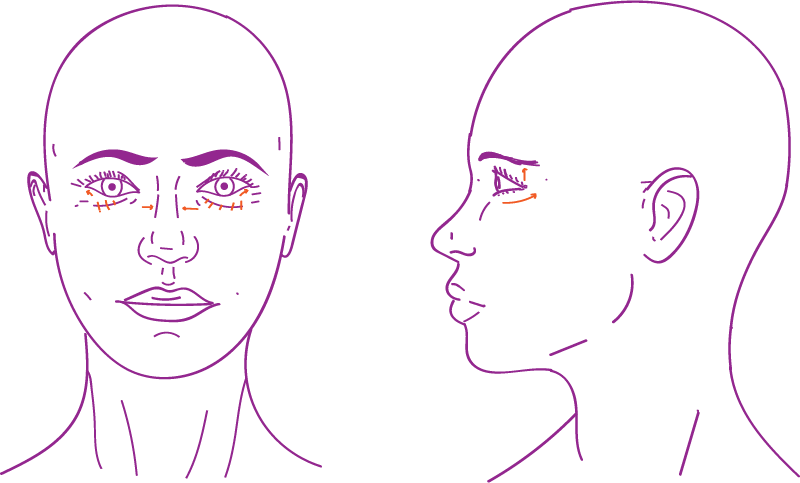 In lower blepharoplasty we perform additional techniques such as the middle cheek third lift or lipofilling of the middle third, to highlight the cheekbones more.

Blepharoplasty or eyelid surgery removes fat excess that can appear above or below the eyelids. Over the years, the fatty bags set in the upper and lower eyelids start drooping progressively, which starts being noticeable at the age of 35-40. This causes the following eyes appearance: drooping eyebrows, drooping upper eyelids and bags under the eyes.

The lateral tightening of the lower eyelid (canthopexy) is also performed to rejuvenate the appearance of the eyes and prevent the typical inexpressive or operated eye look obtained with other techniques.

During surgery, skin excess of the upper eyelid and upper fat pockets are removed. Subsequently, we approach the lower eyelid by removing the fat pockets transconjunctivally in most cases, that is, inside of the eyelid. This avoids incisions in the skin and external scars as well as sectioning the orbicular muscle, and reduces possible complications.

The postoperative period after blepharoplasty is not painful. Most patients describe a feeling of tightness around the eyelids. This discomfort can always be easily controllable with the common analgesics.

Blepharoplasty is usually done in the outpatient care under local anesthesia and slight sedation. After the intervention, the patient will have a slight inflammation and local hematoma from 4 to 10 days, depending on the case and the technique performed.

The patient will have a more refreshed and youthful appearance which will significantly improve the smiling and resting facial expression.

The blepharoplasty with canthoplasty focuses on lifting the external corner of the eyelid to a height that allows to recover the form that it used to have. We are trying to obtain a more almond shaped eye and avoid a sad and tired look. In short, it improves the appearance of our eyes.

In many cases it is an additional technique for the upper blepharoplasty or lower eyelids, or both.

With cantoplasty procedure, we modify the position of the corner or lateral canthus of the lower eyelid. Canthoplasty is usually performed to elevate the lateral canthus after drooping due to aging or after some surgery that affects the eyelids.

We can also tighten the lower eyelid horizontally or put the skin of the entire lower eyelid a little tighter (if accompanied by orbiculopexy or orbicular muscle tension).

It can be performed with other procedures such as transconjunctival lower blepharoplasty, mini-lifts of the middle part of the face, or surgery to correct entropion or ectropion.

Blepharoplasty is an operation of aesthetic surgery that seeks to rejuvenate our eyelids. As time passes, our eyelids also age as well as the rest of our face, making our eyes look tired or sad.

Currently, it is one of the most performed interventions in facial cosmetic surgery and brings the greatest satisfaction for patients who undergo this surgery.

It is indicated to all patients who wish to improve the appearance of the eyes due to:

In case of being a smoker, it is necessary to stop the usual consumption of cigarettes at least two weeks before the surgery, as well as to avoid vitamin E and aspirin, as it could cause bleeding problems during the intervention.

After the surgery, the eyelid function of lubricating the eye will be affected which will cause more frequent symptoms of dry eye during the first few weeks. This happens more often in patients who already have a history of dry eye.

Before performing it, it is mandatory to have a medical examination: The surgeon will verify that both the general health and the patient’s eye are at a favorable time for the surgery to have optimal results.

The patient must have an antibiotic and anti-inflammatory eye drops treatment during the first week.

The inflammation appears the next day and lasts about one week, as well as bruises, which are always asymmetrical.

If it is only upper blepharoplasty, the inflammation and bruises can last 2-5 days.

During the first day, the patient should have a relative rest and sleep that night in bed that is a little elevated. This is because we are in a horizontal position at night and the blood goes down to the head, so the inflammation is worse in the morning. If we sleep with a slightly elevated head, we avoid this effect.

During the first 48-72 hours, it is advisable to apply cold compresses intermittently on the area where the operation is performed, in order to lower the swelling as much as possible.

The patient can or should wear sunglasses if he/she goes out, to avoid sun exposure and hide bruises that may last between 1 and 2 weeks, depending on the surgery.

The recovery is usually quick: the incisions leave no scar and they are not visible. The skin of the eyelid heals very well and the incisions are always hidden in a skin crease.

However, the final result will be evident approximately one month after the performed intervention.